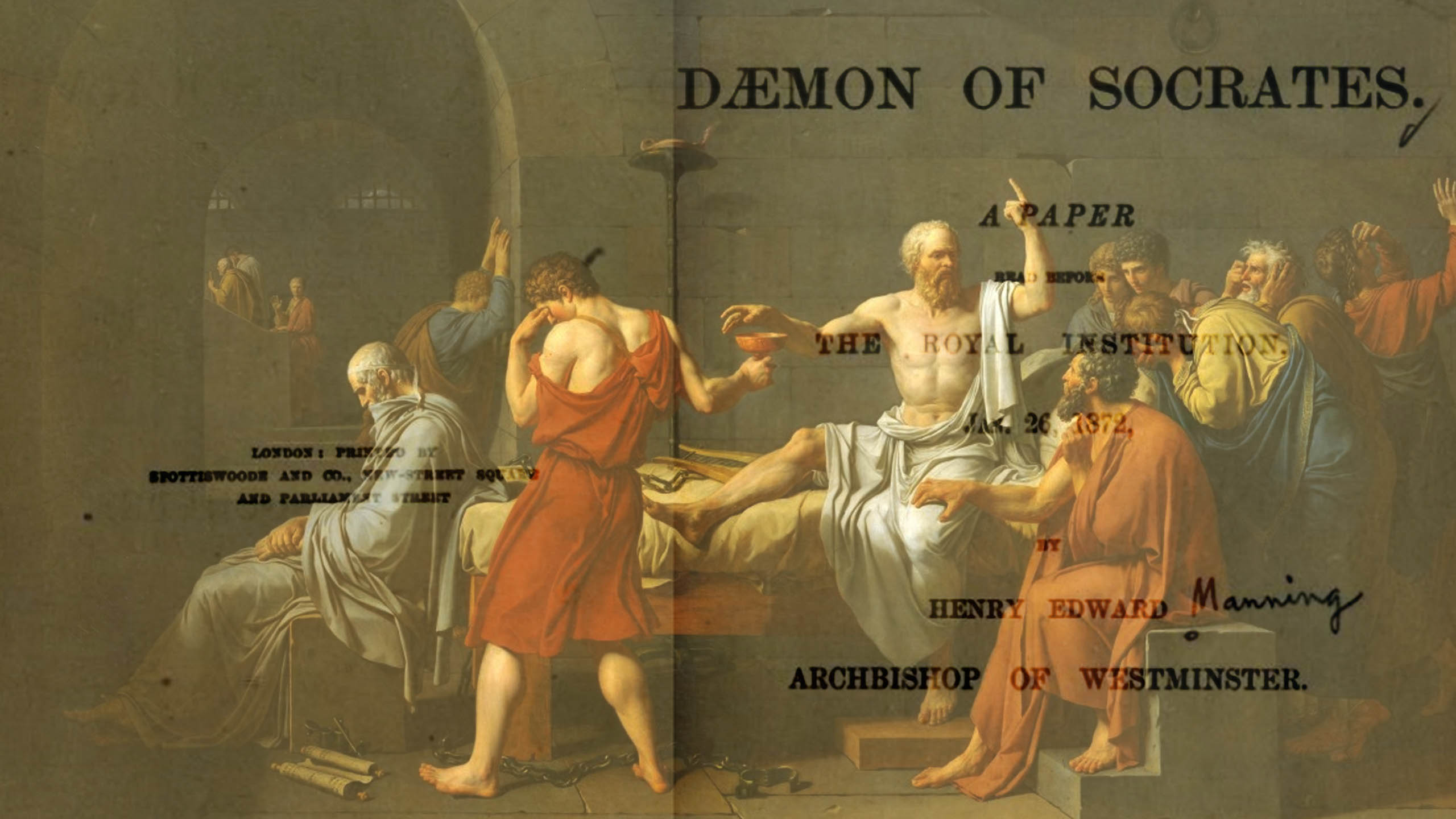 Have You Heard Of The Daemon Of Socrates?

The Daemon of Socrates is a topic not so commonly known to the world, while the name Socrates remains a famliar household name. In this article we are going to take a brief look into the force behind the man known as Socrates.

Did you know Socrates believed he had a divine inner voice?

Is that why he was so smart?

Socrates often made mention of being guided by a divine inner voice, a daemon. This spirit would take the form of an inner voice that he would hear within himself. This inner voice did not tell Socrates what to do but indicated when he was not to do something. The voice was would him before he was about to make a mistake.

I am sure many have heard the idea of crazy persons hearing voices in their heads? Perhaps those voices are coming from spirits within the individual. Does that mean Socrates was crazy? My answer would be there are different forms of “crazy” and they would need to be looked at on a case by case scenario to provide an honest response.

Some of the secret behind Socrates can likely be found in the etymology of the word “genius”, you might already be familiar with this concept. The word genius has a connection to the word Jinn, Djinn. The Romans (as one example) believed each person had an inner daemon, an inner genius. These were seen as tutelary deities.

The Wikipedia defines a tutelary deity as “a spirit who is a guardian, patron, or protector of a particular place, geographic feature, person, lineage, nation, culture, or occupation.”. In the Ancient world of polytheism individuals such as Plato believed that each individual was born with their own Daemon that watched over them like a guardian. There were thought of as natures spirits, forces of nature.

The Bible supports their existence, however, these are not spirits we should have any communication with…

When you read the Book of Ephesians, you will read about the world under the control of spiritual forces as opposed to flesh and blood.

The descriptions of the daemons of the ancient world certainly seem to be a clear overlap with what we read in Ephesians and quite likely similar to the forces operating within Plato. In the Old Testament we see words such as the Hebrew Shedim and se’irim which was a type of goat demon sometimes translated as a “goat idol” as seen in Levitius 17:7. The Israelites had performed sacrifices to these spirits who were associated to certian idols.

Leviticus 17:7 (ESV)
So they shall no more sacrifice their sacrifices to goat demons, after whom they whore. This shall be a statute forever for them throughout their generations.

Leviticus 17:7 (NLT)
The people must no longer be unfaithful to the LORD by offering sacrifices to the goat idols. This is a permanent law for them, to be observed from generation to generation.

Even in the New Testament we can see this practice continued as we read in 1 Corinthian 10:20…

1 Corinthian 10:20 (BSB)
Rather, that what the Gentiles sacrifice, they sacrifice to demons and not to God. And I do not want you to be fellow partakers with demons.

All througout the Bible there are many examples of people who performed sacrifices for demonic spirits. For those who have heard of the Goetia, the word Goetia itself and the spirits within it have a connection to goats. In the Book of Psalms 106:37 we can even read of the people sacrificing their sons and daughters to demons.

This concept of “goat demons” seems to have made its way into modern society through symbols such as the Baphomet of the Knights Templar. The Templars in turn influenced the Freemasons and we see within their initiations an overlap with these goat spirits or goat demons. I will point out that there is has been some confusion regarding the Baphomet being overlapped with the Goat of Mendes and that is a mistake.

Does that imply that these modern day groups are “sacrificing their sons and daughters”?

Not at all, however, there could likely be some rogue groups in existence that still continue the barbaric practice who are much more morally unsound. You have to remember like any tool, wisdom in the wrong hands can do great harm as opposed to good. Socrates as far one can tell held a very high set of morals. My argument would be that these spirits led Socrates away from eternal life but not that they made him evil in his actions. From my research that seems to be the entire purpose of spirits that are not of God, to mislead. Eternal life can only be obtained through Jesus Christ and this was clearly a direction that the Daemon of Socrates would not have guided him towards if his existence had taken place later in time. These demons are waging a war with the heavens. In the Book of Jubilees you can see Mastema (Satan) petitioning God to have 1/10 of the demons out of the underworld so that he can afflict and tempt men so it would make no sense for these wise spirits to lead any man to God regardless of how benevolent they can seem.

While demons are known to be extremely wise but they are also known as evil spirits. The Book of Enoch teaches that they are the spirits of the Nephilim (Enoch 15:8), the giants who were created when angels had relations with women (Genesis 6:4). When those Nephilim (Giants) perished, their spirits did not go to heaven but roam the Earth.

Evil spirits even if not apparently evil in the end will still mislead those they influence away from the eternal life promised by God as they are at war.

Maybe it would be best not to tap into our inner genius or should I say inner daemon?

I send my blessings,

How To Pray And The Method Christ Taught His Followers

Want to be the first to know when new videos are available? Subscribe to our email newsletter. No spam!

Add Us To Your Social Media!